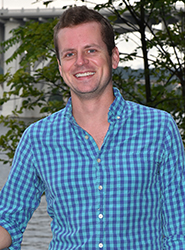 Drew Paul received his BA from Emory University, and his MA and Ph.D. in Middle Eastern Studies from the University of Texas at Austin. At Tennessee, he teaches all levels of Arabic language as well as courses on Middle Eastern literature, film, and culture. He is currently completing work on a book manuscript entitled  Deceptive Walls: Fracturing Borders in Palestine and Israel, which examines the depiction of checkpoints, walls, and other border spaces in the region.